We glide out of Swantown Marina on National Learn to Row Day. Jean Farber perches in the bow (left), with me just behind her. Daniel Farber is amidships in the burgundy sweatshirt. My wife, Barbara, was our event photographer.

THIS OLD DOG LEARNED A NEW TRICK on a recent visit to our friends Daniel and Jean Farber in Olympia.

“It’s National Learn to Row Day, and the local rowing club is offering free lessons on Budd Inlet, want to try it?” enthused Jean, a soon-to-be-retired teacher whom I had never suspected might become an aficionado of the oar and the eight.

So we headed down to Port of Olympia’s Swantown Marina on a calm and cloudy morning at 8:30 to sign up for a spot on a 10:40 a.m. outing with Olympia Area Rowing (OAR).

The Olympia club, based in an impressive little warehouse chock full of rowing shells of every size and construction, has been doing these recruiting demonstrations for years, and they were a model of good organization.

We started with a guided tour of their facility and learned that the big fiberglass, eight-person shell we would take out was valued at about $30,000, so they politely requested we not wreck it.

We then jumped on to ergometers for a warmup session and lesson on how to sequentially pull with our legs and back while not tangling the oar in our knees as they pumped up and down (tougher than it sounds!).

Our vessel bore the name “Salmon & The Seal,” with corresponding Salish tribal images.

Four experienced club rowers, plus a veteran coxswain, then joined four of us newbies in the boat, so each of us would have a model to mimic as we learned the technique. Jean and I were in the bow; Daniel was in seat 6; Barbara was our on-shore photographer.

After 45 minutes on the lovely smooth water that morning, with the state capitol dome on the horizon, I can’t say our crew was quite a well-oiled machine (a few oars splashed and we weren’t always in sync). But we returned the boat in one piece and all learned the basics. Jean, the new water nymph of Budd Inlet, said she wanted to sign up for more. 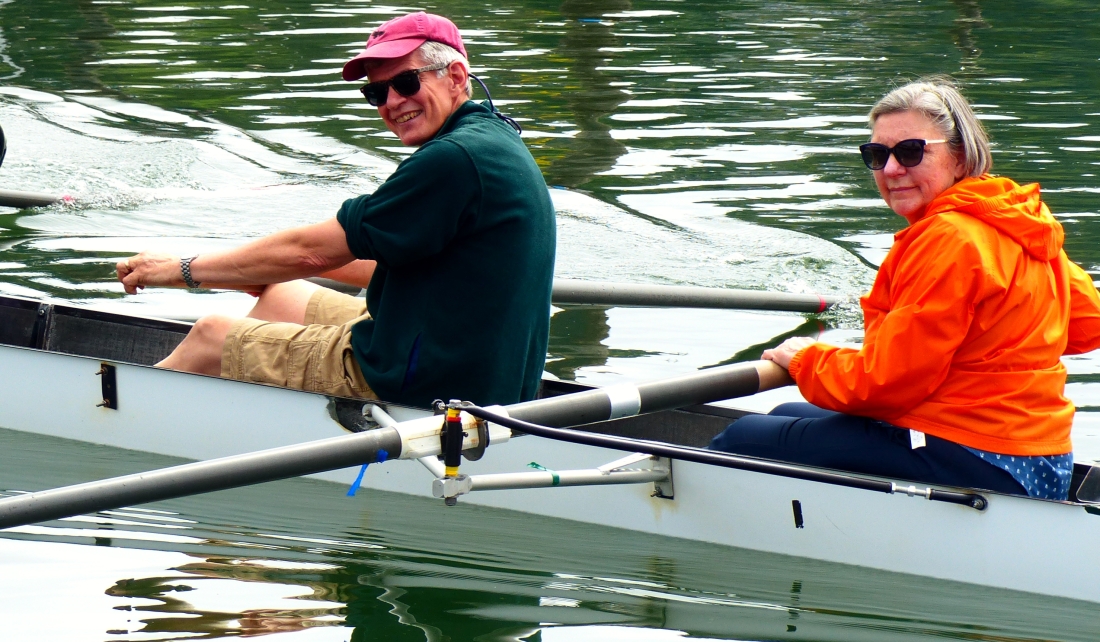 Happy on the water: Intrepid rowers Brian, left, and Jean.