LONG BEFORE I WORKED AT THE SEATTLE TIMES, my first daily-newspaper job was at the Yakima Herald-Republic (before it was owned by The Seattle Times, as it is now.) For Barbara and me, it was our first time living east of the Cascade Mountains. We Seattle kids, who liked green woods and water views, always thought the world ended at North Bend.

But sagebrush-rimmed Yakima had its way of wooing us. I used to go to work on a nice day and leave the windows down on the parked car; there was no chance it would rain. Do that in Seattle and you’ll get soggy seats.

And behind our little bungalow on South Sixth Avenue we had the best vegetable garden we’ve ever had before or since. It was two years after Mount St. Helens had sent billows of ash eastward, bringing Yakima a day of darkness. When we lived there, we’d dig down only an inch in our garden to find a band of chalky grit, and that stuff was a great soil amendment. Add long days of sunshine, plus irrigation water from the Naches River, and we had ripe tomatoes, eggplant, peppers and more.

Now, after most of 25 years living on a boat, we’re on land again, and we’d love to have another bountiful garden. On our rock in the San Juans? Good luck!

I use the word “rock” advisedly. Our cabin perches atop a stone outcropping, which gives it a great view, and I love the characteristic San Juans topography. There’s soil around us, but dig down less than a foot and you’ll hit rock. I managed to plant a few trees in one spot, but next to them you can marvel at the BOULDER I dug up in the process. You could almost sit down and eat your lunch on it. The soil isn’t the best, either. We’ve tried growing a few things other than Douglas firs, which like it here, but most of our efforts have gone to the brush pile after a few years of steadfastly refusing to prosper.

That’s not to mention the deer, which mercilessly nibble just about everything that isn’t fenced.

But that isn’t stopping us from trying this summer, with imported soil in big pots on the cabin’s deck. On the upstairs deck off our loft, the most protected spot, we’re bravely experimenting with snow peas and pole beans, growing from large pots next to a trellis that I’ve lashed to the railing. Since both put out many eager tendrils and love to climb, I’ve supplemented the trellis with a sort of cat’s cradle of white zigzagging string. (Barbara thinks I got carried away.) So far, so good, though it’s the east side of the cabin, with lots of big trees around, and sunshine is sparse. We’ll see. 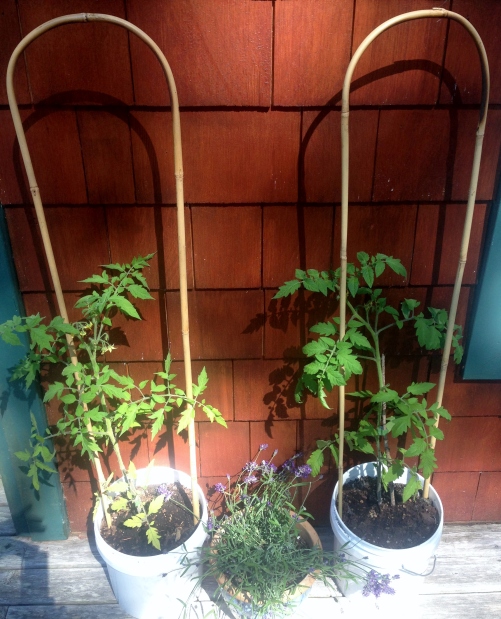 The tomatoes are movable, so we can shift them to sunny spots on the Nuthatch cabin’s deck. What’s retirement for, if not for pandering to your plants?

The next experiment is with tomatoes. Having grown up in Western Washington, the land of green tomato pickles (who actually likes those?), I’m dubious that we’ll get any to ripen. We don’t have a good spot that’s sunny all day (see previous mention of big trees), and because we’re surrounded by water it’s a rare day that we get as warm as 75 degrees, even at summer’s height. (Sounds like a good recipe for more of those damn pickles, if you ask me!) But a generous neighbor with a greenhouse offered us a couple of plants that were already tall and flowering. So we’ve planted them in buckets, with the idea that we can move them around to sunny spots as the sun moves across the sky.

Beyond that, we have a large planter divided between rocket (the Australian name for arugula, which gets kudos for zooming upward) and Swiss chard (limping along like a Swiss goatherd with bunions), plus a rail-mounted planter with cilantro (viva for its vigor), dill (doing well, maybe it can flavor those tomato pickles) and tiny little sprouts of oregano and basil (still about flea-size after a month of hopeful coaxing).

Oh, well, we’re retired. We have time to pander to our plants. Maybe we’ll pack their pots into the pickup and take them on a vacation to Yakima.

There is no gardening without humility. Nature is constantly sending even its oldest scholars to the bottom of the class for some egregious blunder. 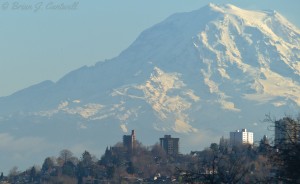