WeLike bobs at a buoy on Watmough Bay on a perfect October day in the San Juans.

YESTERDAY WAS QUIET, uneventful, and one of the best days of our lives.

Monday I finished, smack dab on deadline, and filed the text, photos and maps for my project for Mountaineers Books.

Tuesday was a perfect October day, and Barbara and I realized: This is why we came to this little island with all its challenges. The sun was shining, maple leaves were golden, a morning fire in the wood stove drove away the cabin’s chill, and by noon we packed a lunch of spaghetti sandwiches — don’t roll your eyes, you don’t know what you’re missing — and jumped in that classic runabout we’ve been using mostly for trips to the Lopez dump (which has its odd pleasures, but that’s another blog post).

A light Northwest wind fluttered the flag at the Center Island dock and rippled the water, but by the time we scooted past Rim, Ram and Rum islands and out Lopez Pass, we were up on plane and found Rosario Strait in a delightfully atypical state — glassy.

Mount Baker, all snowy and gorgeous, soared on the eastern horizon as subtle as fireworks on the Fourth.

I nudged WeLike’s throttle and we zipped gloriously along at 20 knots, which for an old full-keel sailor who could never count on more than 4 knots if the currents weren’t just right, was damned fun.

Our destination, 5 miles from our dock, was Watmough Bay, one of our favorite Lopez Island discoveries, where San Juan County Land Bank, one of the stewards of the place, maintains free mooring buoys.

A lone sailboat occupied the bay, a narrow cleft of saltwater at the foot of a 466-foot-high rock cliff called Chadwick Hill that blocks Northwesterlies considerably better than the Berlin Wall blocked democracy. At the hill’s top, wide-winged turkey vultures wheeled on updrafts, never flapping a wing.

We snagged a buoy, broke out our sandwiches, poured steaming tea from a Thermos and reveled in the view of Baker, the nearby splashes of fish and seals, the colorful autumn leaves framing the beach, and the lovely quiet of the place.

After a while, a family from the sailboat went put-putting past in a dinghy on their way from the driftwood-strewn beach back to their boat. Smoke soon billowed from their barbecue and added spice to the autumn air. The sun was so warm we had to drape a towel to make some shade — an OK problem to have in October above 48 degrees north. 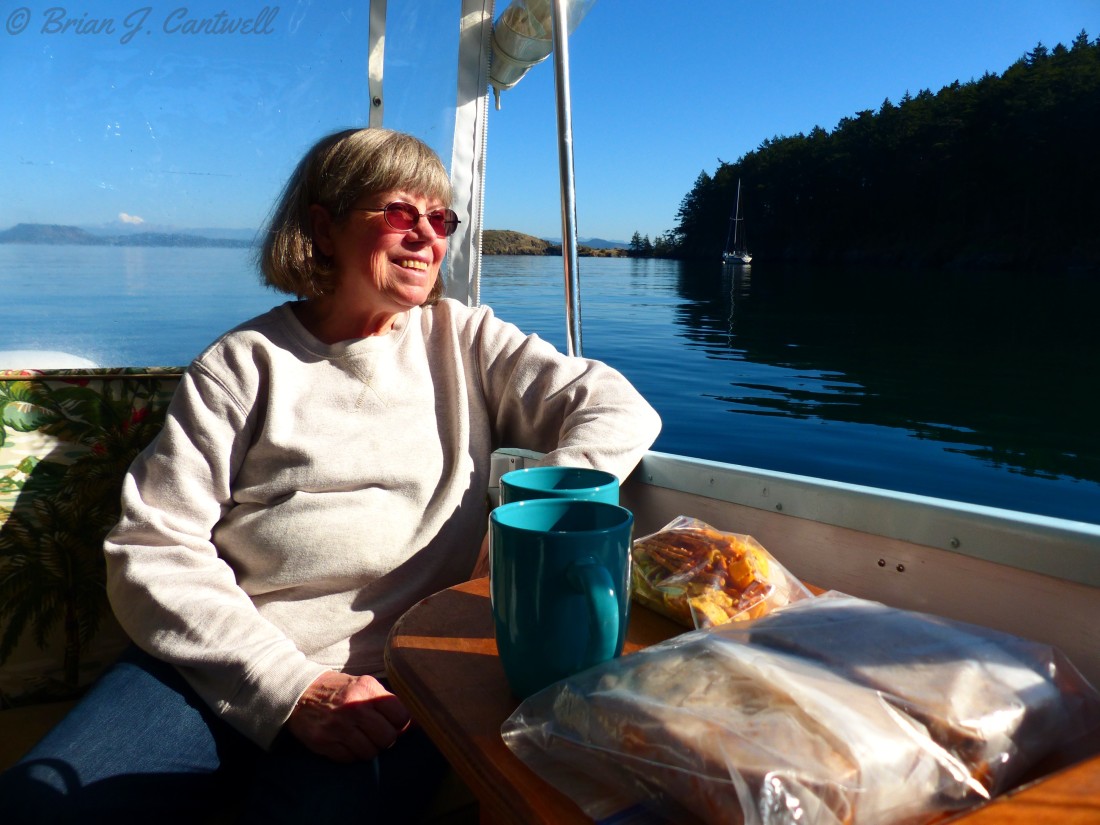 Barbara sets out sandwiches and soaks up some sun.

We worked a crossword, shot some photos. An hour later, another sailboat motored in past Boulder Island so we slipped our buoy to make room and headed home with a friendly wave.

Back at the cabin Barbara napped in the loft with a warm cat while I got out my Finnish ax and stepped down our salal-bordered path to split some wood as the sun sank in the sky and set Lopez Sound aglitter through our screen of big firs.

Dinner was Barbara’s Singapore Noodles, with a movie, a glass of wine and a little bit of popcorn later as a half-moon lit the sky outside.

Six months ago yesterday was my last day in the newspaper office, I just realized. Did we make the right decision to retire as we did? Maybe so. Maybe so.

In the other gardens
And all up in the vale,
From the autumn bonfires
See the smoke trail!

Pleasant summer over,
And all the summer flowers,
The red fire blazes,
The grey smoke towers.

Sing a song of seasons!
Something bright in all!
Flowers in the summer,
Fires in the fall!

5 thoughts on “It doesn’t get better than this”