Awaiting her new motor, WeLike sits at the West Sound Marina guest dock on Orcas Island as a Kenmore Air seaplane painted like an orca taxis in to pick up passengers headed for Seattle.

HALLELUJAH, we are islanders empowered.

In the past year, we’ve learned that a few needs are pretty basic when you live on a remote little island in the San Juans. Near the top of that list: a boat you can depend on.

We love (not just like) our restored 1957 Skagit Express Cruiser, WeLike, a handsome little runabout built in La Conner, where Barbara once worked as the town librarian.

WeLike has served us pretty well so far. But WeLike’s motor, a 90-horsepower Evinrude E-TEC outboard dating to 2007, has performed spottily, with enough hiccups and a continuing series of repairs that added up until we’ve finally thrown in the shop towel. Tuesday, we got a brand-new motor mounted on the boat at West Sound Marina on Orcas Island.

As is often the case when you live on a remote island, acquiring the new outboard was no small feat. It wasn’t at all like buying a new car, where the sales folks are masters at nabbing any warm body that wanders in to the showroom and sending them home with a stunned look on their face while driving a shiny new latest model.

No, this acquisition took weeks of palavering, a score of phone calls, dozens of emails and a rather large wire transfer. 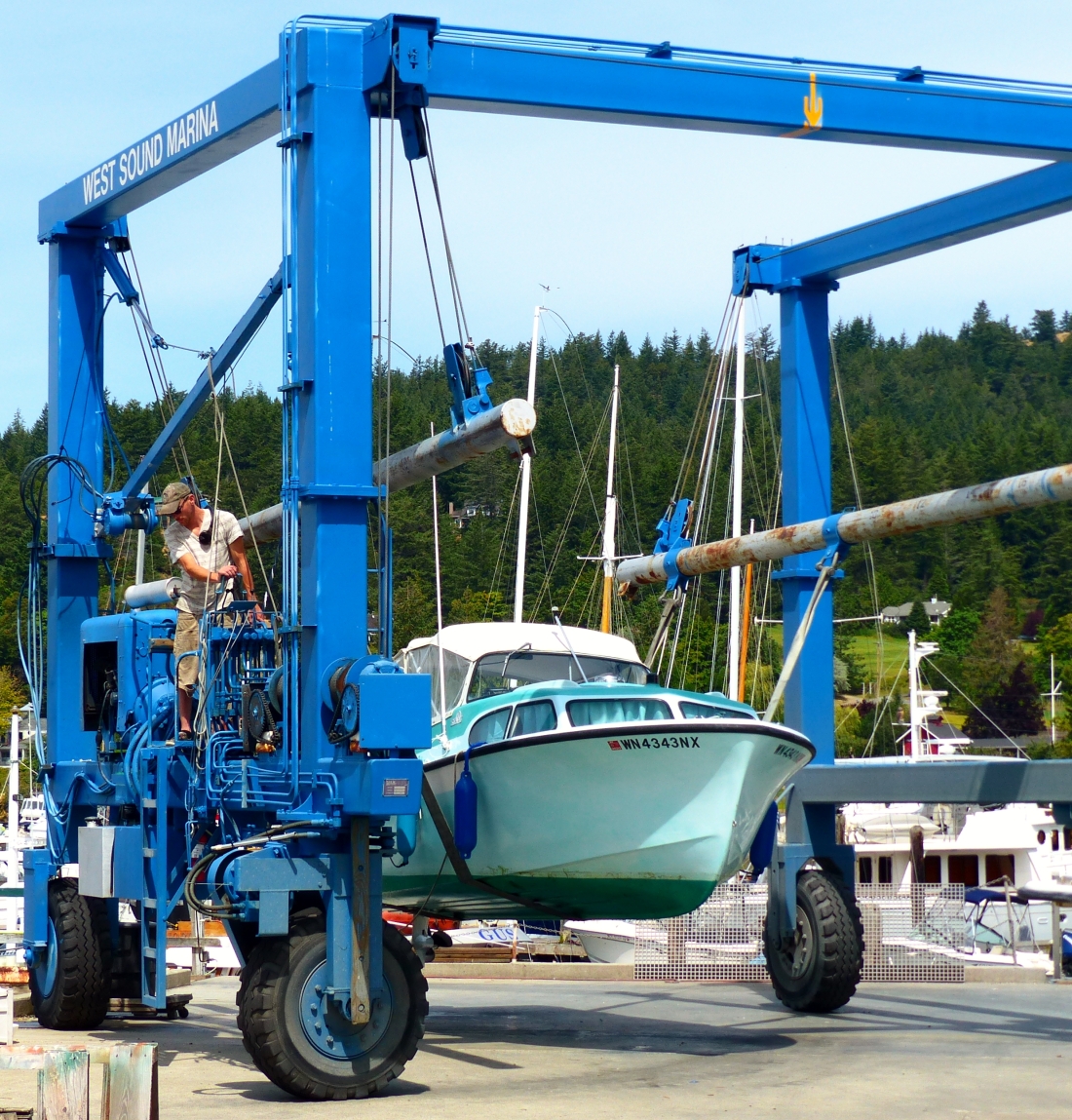 In the slings of a giant Travelift, little WeLike resembles a spider-trapped-fly as she’s plucked from the water for repowering.

First I have to tell you that, despite accusations of insanity from some of my island friends, we replaced our motor with the same make and model, despite my occasional choice curses directed at Mr. Evinrude as I performed repairs in recent months and encountered inaccessible bolts, illogically engineered parts and other foibles.

My explanation: (A) This is the devil I know, and all outboard makers have their critics; (B) This time I can baby my new engine and give it proper maintenance from Day 1 instead of struggling with inherited problems; and (C) I like the fact that this motor still uses two-stroke technology, modernized to be more efficient and eco-friendly. Two-stroke engines have fewer moving parts than four-stroke engines, so they are less complicated, smaller and lighter. The latter makes a significant difference when you’re hanging an outboard on a little boat sized by 1950s standards, before the advent of Large Americans Who Drive Monster Pickups.

Making this long story shorter: Buying a new 2019 engine from the local Evinrude dealer on Orcas Island would have run well more than $10,000. But trolling the internet, I found a new 2018 model sitting on a showroom floor near San Diego priced more than $2,000 less. Even paying to truck it here, we saved plenty. That counts when you’re old retired people. And even with the 2018 model, we qualified for a spring special that gave us two extra years of warranty coverage and a $300 rebate.

West Sound Marina agreed to mount the new motor for us, even though we didn’t buy it there. But as carpetbaggers who had sent our cash to California, we had to wait a few weeks until after the Fourth of July boating rush, when they found time in their yard schedule.

My engine repairs held true enough that we zipped the 12 miles over to West Sound on Monday. We tied up to the marina’s guest dock with a lovely view of eagles and other bird life on rocky little Picnic Island, just off the Orcas Island shore. We spent the night aboard WeLike, our first time sleeping on her. The little cuddy cabin was cozy, with new turquoise curtains Barbara had installed. The one-burner butane stove cooked up a tasty dinner, and we were blessed with a flat-calm night and a sky full of dazzling stars.

Installation Day was long and tedious and need not be relived here. The bottom line: By shortly after 5 p.m. Tuesday we were finally zooming homeward to Center Island, with our new motor purring behind us like a lion full of prime wildebeest.

The helpful yardman at West Sound Marina lowered the new motor into place.

Now we can wander these islands at will, boat camping when the spirit moves us this summer. We live in orca country, so we bear the responsibility of careful boating, gearing down whenever whales are sighted and keeping our distance per new restrictions. But now we can enjoy the Salish Sea with new confidence. Frankly, it’s a whale of a relief.

4 thoughts on “All revved up on Center Island: When a new boat motor is more than just a prop”