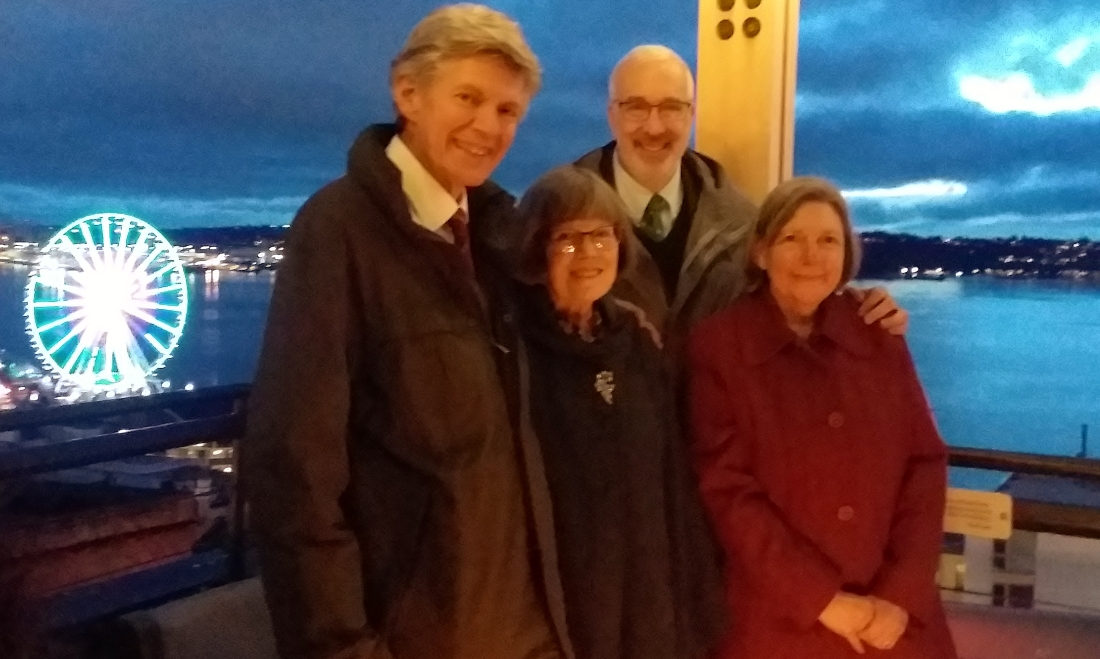 From left: Your scribe, his lovely bride, and friends Daniel and Jean, on the rooftop at Seattle’s Inn at the Market on a special Sunday. In the background is the Great Wheel, edging Elliott Bay.

WHEN YOU SPEND WINTER on a really quiet little island, special occasions tend to be really special.

Such was the case this past weekend, when Barbara and I sampled Seattle’s high life in celebration of our 40th wedding anniversary.

Forty years sounds like a lot, but it’s not a true measure of how long we’ve been together. That would be 47 years this coming New Year’s Eve, the anniversary of our first kiss, a big smooch in the back seat of her boyfriend’s car, while her then-boyfriend (not me) was in the driver’s seat — but, oh, hey, we don’t need to go into all that. (It was complicated.)

We were high-school sweethearts. I was 16 and she was the alluring older woman of 17, not long out of Melbourne, and with a tantalizing Australian accent.

We dated for seven years before finally making it legal on December 15, 1979.

Sunday, we booked a stay in a posh water-view suite at our favorite hotel in the world, Seattle’s Inn at the Market, in the Pike Place Market. Daughter Lillian and I spent the forenoon doing our annual Christmas shopping spree, dividing our time between the Ballard Farmers Market and Pike Place. At 2:30, we met up with Barbara, who had already checked into our suite. We found her reclining on a chaise longue next to a wide window with an astounding view of the market, the Seattle waterfront and Puget Sound. Shoppers scurried about below. Ferries scuttled on Elliott Bay. Gulls soared at eye level. She seemed pretty happy.

Friends Daniel and Jean Farber drove up from Olympia and joined us in our suite for a cocktail hour — a shared bottle of good bubbly from Walla Walla and snacks from DeLaurenti’s deli. Daniel, my former college roommate, was best man at our wedding. We all dressed up a bit for this occasion. I wore my old wedding tie, which was only a tiny bit frayed (not unlike its wearer). Barbara found her actual wedding lipstick. It was still a dark and luscious burgundy.

Our evening was a dinner show, the holiday extravaganza at Can Can cabaret, an underground theater next door. (From the bar you can look straight up through little translucent tiles and see people’s feet walking the sidewalk three feet above you.) The show had a lot of winter-wonderland-y music, flashy dancing, crazy acrobatics, a lot of titillating humor and, uh, not a lot of costumes in some scenes. (There were fans, and feathers, and sequins.)  We all agreed that, while kick-dancing a fine line at times, it was whimsical, not crass. And we had fun, fun, fun.

It was a delightful way to celebrate that we, too, are still alive and kicking. And sometimes getting away from our island hermitage for an indulgent weekend in the city is just what the lifestyle doctor ordered.

Brian, Lillian, Barbara and Jean warm up by the rooftop bonfire at the Inn at the Market. As Barbara and Jean demonstrate here, by the end of the evening, after a couple bottles of bubbly, we were all a little blurry — in the best sense.

5 thoughts on “Kicking up heels for a marriage milestone”