Putting finishing touches on our new composter. It could probably land on Mars. But at least it will help turn our banana peels and apple cores into rich black soil.

I CAN’T SAY I EVER truly “got” all the philosophical nuances of Robert Pirsig’s “Zen and the Art of Motorcycle Maintenance” when I was 20. The book, which Philosophy Now cites as the best-selling philosophy book of all time, was required reading in my first course of study at The Evergreen State College in 1976. Getting through the 500+-page book then was like swallowing 100 hamburgers. There were tasty bits — a pickle slice here, a smear of mustard there — but what a struggle.

Now, in this age of quarantine and pandemic, it has oddly come back to me.

I first thought about the book recently as I took apart WeLike’s outboard motor and carefully pieced it back together with fresh grease and carefully torqued bolts. It came to mind again as I spent this past week measuring and cutting lumber, drilling, sanding and following plans to build a new compost bin that at times seemed to rival a Mars lander in its intricacy of design.

And I realized that this time of angst and isolation is perfect for losing one’s self in a project of great detail and challenge, akin to Pirsig’s peace of mind found in comprehending the mechanical workings of his old motorcycle on a road trip from Minnesota to California. While his cycling companions relied on professional mechanics to make repairs when their new bikes developed problems, Pirsig’s character listened to his machine’s every purr and hiccup, and got out his own tool kit when it was time to smooth out his ride.

For me, keeping our new Evinrude buzzing happily through regular upkeep was a goal well met. Building the new bin was more a necessity, to replace an elderly cedar-slatted box that we’d come to call our “Leaning Tower of Compost.”

Understand, when you live on a remote island with no public services such as trash pickup, composting isn’t just something you do after waking up one morning and resolving to be more organic. It’s a necessity, unless you want to end up with a back porch buried in Hefty Lawn and Leaf Bags bulging with greasy black banana peels and rotting apple cores.

I got plans for the composter from an old Rodale guide to composting, checked out from the Lopez Island Library (which I love because they still have those lined “Date Due” stickers inside the front cover of every book, and they let you stamp the date yourself when you go through the check-out).

The Rodale plans included a complete list of needed lumber, nails, screws and hardware, which I picked up last weekend after bravely venturing to virus-ridden Seattle to visit our daughter.

With the parts assembled and the plans to study, I thought it would be a doddle. I went to work on the Nuthatch Cabin’s deck. Happily we had a week of sunshine, because it took all week to complete.

The Rodale folks are usually reliable when it comes to anything organo, but these plans were flawed. The list of lumber needed was off. The design was overly intricate, requiring some fancy powertools I don’t have. But I adapted and made it work. I even innovated a “hideaway” prop to hold the lid open. As I often tell Barbara, “I ain’t Joe Cantwell’s son for nothing.” (Dad was an aerospace engineer, my loyal reader might recall.)

In the end, our new compost bin, wrapped in shiny wire mesh to make it rodent-proof and sitting on a sturdy four-legged platform, does slightly resemble a Mars lander. With proper hinges and latches on the lid, and good air circulation on all sides, it’s a big improvement over the “Leaning Tower.”

And I enjoyed a week of mindful focus on a project that transported me away from other worries of the world.

I hear the government might send us all money to revive the economy. Maybe I’ll get an old motorcycle… 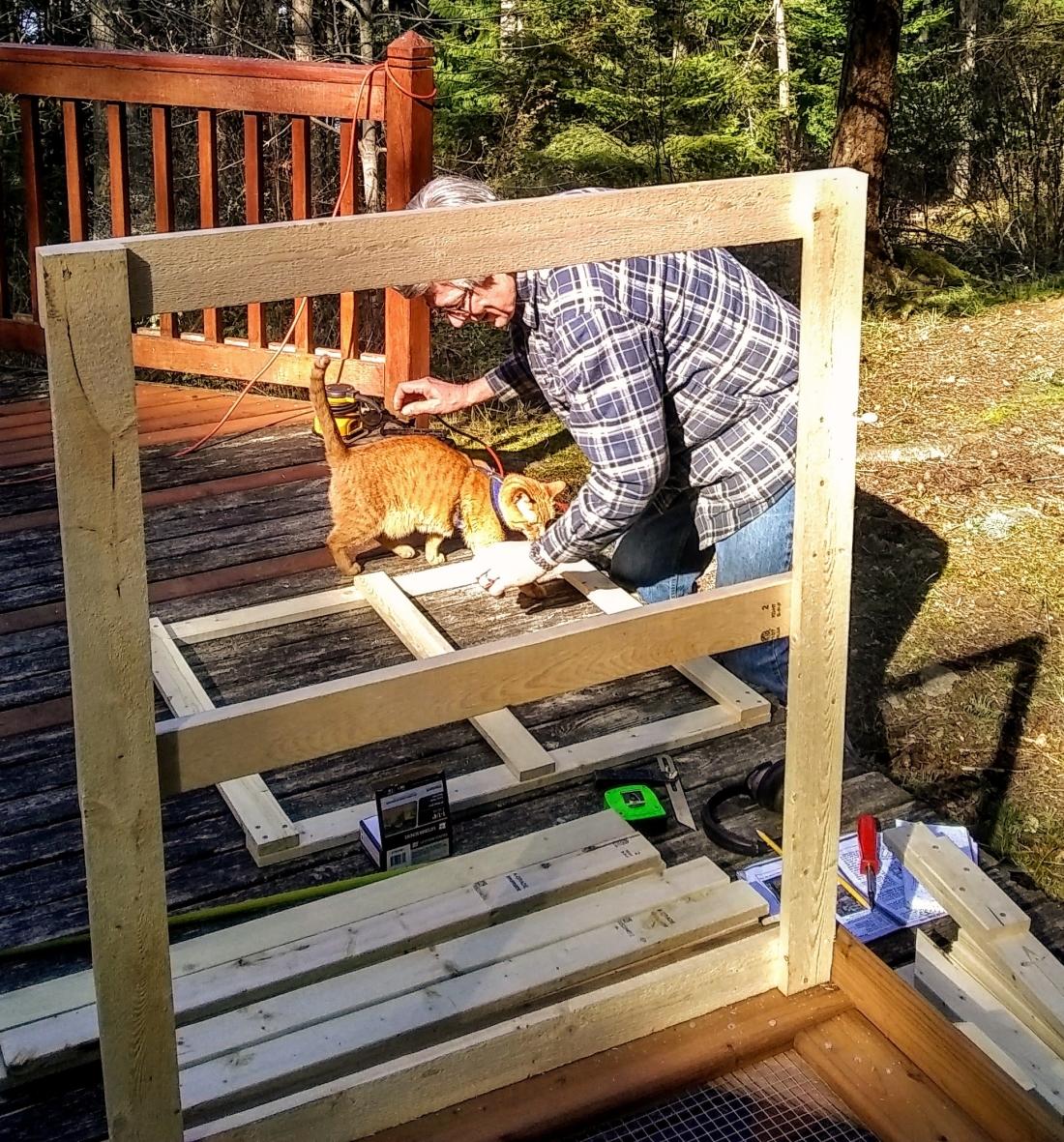 Kitty supervision is vital to most building projects, I’ve found.

2 thoughts on “That was zen, this is now: Mindful projects in an age of quarantine”